Description: The HP Buff of equipment items are increased by 20%. For every 200 points of damage inflicted upon Belerick, the flower of life attacks in the direction of an enemy units, dealing 25 points of magic damage in addition to 2% of Belerick’s total HP. The flower of Life first attacks nearby enemies marked with Nature’s Seed.

Guideline: With his passive, the HP received from the item will be incresed by 20% i,e, if he received 500 HP from the item, 100(20%) extra HP will be added which will makes him King of HP replacing Hylos. Beside this, whenever he received 200 points of damage, a kind of return damage will be given through a flower of life, which will attacks enemy units dealing 25 points of magic damage + 2% of Belerick’s total HP. Marked with Nature’s seed will be 1st priority to attack. Description: Belerick cast vines in a designated area, dealing 250(+60% Total Magic Power) points of Magic Damage to enemies on the path and in the area, and reducing their movement speed by 40%. It also inflicts a Nature’s Seed mark on a random enemy hero and gets the hero’s vision.

Guideline: A vines will be casted which will deals AOE damage and AOE slow movement. It will also mark the enemies and gets the hero’s vision. On initiation a fight, try to hit the enemies first with this skill, so that they get slow down plus damage. Can also be used to save teammates from being chased by an enemies. 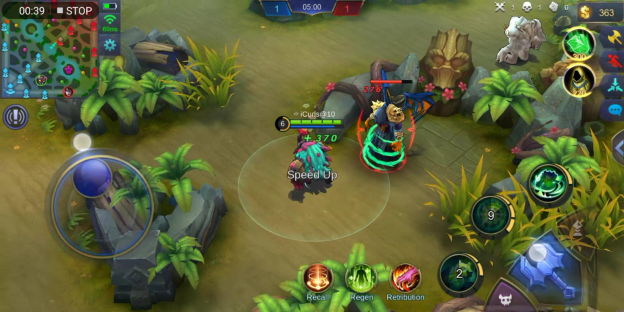 Description: Belerick sacrificies HP to increase his movement speed by 40% and strengthens his basic attacks, which deals 250 poinst of physical damage and 6% of his lost HP. Belerick also regenerates certain amounts of HP depending on his HP lost. Enemy targets are immobilised for 1.2s.

Guideline: On used, Belerick will lost a few amount of HP but will increases his movement speed and basic attacks(250+6% of lost HP). At the same time, his HP will also regenerates depending on lost HP. But the best part of this skill is that, when you hit an enemy, the target will get immobilised i,e, unable to move. Description: Belerick recovers 10% of his HP and creates a guarded area. When allied heroes within the area take damage, Belerick will absorb 40% of their damage taken. While this skill is active, damage dealt to Belerick is reduced by 30%.

Guideline: This skill is a kind of skill that can turns the battle around. On used, Belerick will recovers 10% of his HP and guarded area quite large will be created,. Belerick will absorbs 40% of damage to be taken by allied in the area and not only that, the damage dealt to Belerick during the duration will be reduced by 30%. On using this skill, move around such that the guarded area covers your teammate especially damage dealer.

Idea: 1st priority of Belerick gear is HP due to his passive and skill damage depend of HP. Damage reducing items will be 2nd priority to boost the effectiveness of his Ultiamte(3rd Skill). 3rd priority will be HP regen. Common: The build which fits to every game type. : To disable the enemies i,e, crowd controlling them.