Unique Passive-Divine Justice: After using a skill, the next basic attack will deal an additional 85% of Physical Attack as True Damage. This effect has a cooldown of 1.5s.

Unique Passive-Valor: Physical defense will go up 5 with each basic attack received, for an increase of up to 25 points. Last 3 seconds.

Unique Passive-Insanity: When HP drops below 40%, the hero will receive an extra 10% physical Lifesteal.

Unique Passive-Despair: attacking enemy units that have HP below 50% will raise hero’s physical damage by 25%.

Unbending Will: every 7% of HP lost is converted to an additional 1%nincrease in damage (up to 10% damage increase).

Inspire: greatly enhances the hero for a short period of time. The next 8 basic attacks will ignore 11-25 Armor (increases with the hero’s level) and increase your hero’s attack speed by 55%. Last 5 seconds.

The damage Thamuz deals inflict the enemy with Scorch effect, which deals 16(+5% Total Physical ATK) points of continuous Physical Damage. The effect adds up and deals True Damage, when the target moves. Thamuz moves 30% faster when the scythes are not with him. Retrieving the scythes will strengthen his next basic attack, dealing 100% points of damage, slowing the target by 40% and generates a gush of lava at the places where the target stands. The lava explodes in 2s to deal 210(+80%Extra Physical ATK) points of Physical Damage. 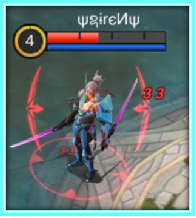 Retrieving the scythes will strengthen his next basic attack and generates a gush of lava at the places where the target stands. The lava explodes in 2s 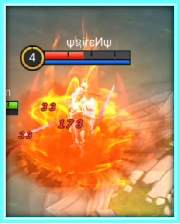 Thamuz tosses a pair of scythes to a designated direction. After traveling for a certain distance or hitting the first enemy hero, they deal 120(+60%Total Physical ATK) points of Physical Damage. The scythes will then slow the enemies nearby by 40% for a period of time and deals 45(+20%Extra Physical ATK) points of Physical Damage in every 0.5s. After a while, the scythes return to Thamuz, pulling enemies on the path. Thamuz can retrieve the scythes to reduce the next CD.

This is useful if you want to pull the enemies toward you or your allies to attack them.

When the scythes return to Thamuz this pulling enemies on the path.

This skill is useful chase or escape from the enemies. Thamuz moves faster when the scythes are not with him. Also, after hitting an enemy or enemies with this skill, the scythes slows them. 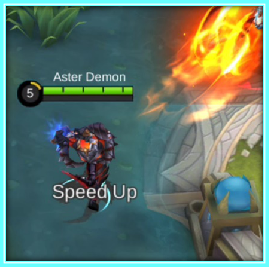 Thamuz jumps to a designated area to deal 230(+60%Extra Physical ATK) points of Physical Damage and slow the enemy in 2s when landing. If the scythes are still travelling, they will return to Thamuz.

Use 1st skill first, when scythes are travelling use 2nd skill to jump towards the enemy, this will retrieve the scythes immediately, when scythes back to Thamuz this will strengthen to Thamuz his next basic attack, slowing the target and generates a lava explosion.

Also, you can use this skill before use ultimate to jump toward the enemy.

Thamuz spouts the lava restored in his body to deal 300(+80%Total Physical ATK) points of Physical Damage to nearby area and creates a cauterant atmosphere around him. The atmosphere lasts 9s and deals 20(+5%Extra Physical ATK) points of Physical Damage every 0.3s. Thamuz recovers 2.5% HP when dealing damage with basic attacks and the scythes when this skill is active. He recovers 0.3% of max HP when the lava deals damage to nearby heroes or creeps.

Try to hit more than 3 enemies to dealt massive damage, this skill is very useful to pushing enemies or pushing lane.