Skills can be missed easily

Skill can be cancelled by enemy’s CC.

Converts 4% of lost HP to physical defence, upto 250. Dealing damage to enemies with higher HP grants 110-250 HP( increase with level) and 0.5 times HP in physical defence. This effect can only occur once every 6s.

Guideline: Every 4% lost of HP will converts into physical defence upto 250, thus he need at least 6250 HP . Also, when the enemy’s HP is higher, and you deal damage to him, HP will be granted and half of HP in Physical Defence. So, in team fight, try to hit enemy’s team hero with higher HP than you to trigger this passive.

Guideline: You can spam this skill to harass an enemies from a safe distance. It effects is AOE, thus deal damage to all the enemies in its path and slowing them. The slow effect is very useful for chasing an enemies or helping ally/ies to escape. In team fight, adjust the skill direction in such a way that maximum possible of enemies are inside the shattered. 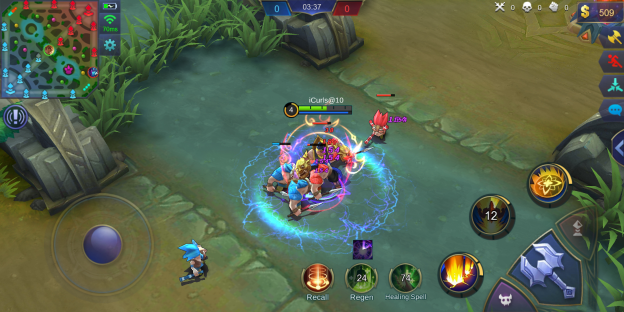 Gatotkaca charges and shouts loudly towards a designated direction, taunting enemies to use basic attacks against him, duration is determined by how long Gatotkaca charges this skill(up to 1.3s). After 2.5s, Gatotkaca will launch a counter attack that deals 100 points of Magic Damage and 1.5% of his total HP in Magic Damage.

Guideline: When holding the skill, it will get charge. Depending upon the necessity, release the charge in the middle or charge it full. Upon release, the enemies will be forced to use basic attacks against him, where the forced duration depends upon the charge duration.

* Use this skill to draw away enemies from hitting team’s carry, chase the enemies or saving allies. Also, few sec later, counter attack will be launch which will deals Magic Damage added extra damage depending upon his total HP.

* When ganking charge the skill when you are inside the bush, then release in the direction of the enemies or use ultimate and continue with this skill.

* The charge can be cancelled by CC by an enemies.

3rd SKILL- AVATAR OF THE GUARDIAN Gatotkaca quickly charges and jumps to the designated area, knocking nearby enemies into the air for 1s and dealing 500(+300% Total Magic Power) points of Magic Damage. Enemy units near to the center of the area are knocked into the air for a longer duration.

Guideline: Easy to miss but very effective if correct. Gatotkaca will charges and jumps to the designated area and knocking all the enemies in the area into the air and deals Magic Damage. The long range of the skill can be used to look around the map. The jump range is quite long, from the lord/turtle spawn zone, if at the edge, it can jump till mid or bot.

But, since it can be escaped easily, the best is to used when enemy CCed or busy fighting other ally.

Since the Magic Power conversion from item is quite high for this skill, giving Gatotkaca Fleeting Time is also very good which will gives not only magic power, but high skill CD Reduction and high Ultimate CD Reduction.

Level up Ultimate whenever available

High Damage Reduction: The main aim of this build is to reduce damage receives as much as possible

Ultimate-Gank: The main aim of this build is to use his ultimate continuously with high CD reduction.

Durable: The main aim of this build is to buff Gatotkaca’s passive and skill, i.e. high HP

: Since Gatotkaca only escape skill is his ultimate, flicker is needed.  Also to increase the accuracy of his 2nd skill.