Guide: How to Play Marksman-Bruno

Bruno is one of the easiest marksman heroes to learn in the current patch because of his attack range and positioning skill. He has almost everything; high attack range, poking and positioning ability, CC and high critical chance. But this hero is underrated and sometimes not even being thought of for most players. In this guide, I will explain how to use Bruno and why we shouldn’t consider Bruno out of the meta.

Each time his skill causes damage, Bruno’s critical chance is increased. Stacks up to 5 times.

This passive will help you farm more quickly since you have more critical hit chance.

Bruno kicks a shot-refracting energy ball at a specified target, dealing Physical Damage and slowing down the target. Bruno or teammates can pick up the energy ball to reduce the cooldown of Volley Shot and Flying Tackle. This is Bruno’s main poking ability. This skill can hit multiple units altogether for some damage so try to harass your enemy while speed up your minion clearance. When jungling, try to aim this skill to bounce the ball back to Bruno to reset the cooldown so you can farm faster.

This is arguably the best positioning ability for marksman. It’s like you have flicker with an additional CC. This skill’s cooldown also can be resetted when Bruno or his allies pick the ball he kicked from the first skill. This means you can use 1st skill and then 2nd skill to pick up the ball and reset both skills at the same time. You can repeat this many times as long as you have mana. With this combo you can speed up your farm since you can move along the map fast. Bruno used his 1st and 2nd skill and now both in cooldown. Bruno picks the ball and both 1st and 2nd skill cooldown are resetted.

While the optimum damage output of this skill is when your enemies are clumped together, don’t hesitate to use this skill when you’re facing only one enemy hero. Its knockback has bigger impact than it seems. It can stop chasing opponents for a brief second and allow you to land 1-2 hits more (based on your attack speed (AS)) which is really crucial since you have high critical chance so you can deal 1-4 AP as additional damage when you use your ultimate. Swift Boots is the best choice for Bruno since it increases his attack speed and thus speed up his farm and increase his damage output.

Demon Hunter for sustainability so you won’t need to recall back to base when jungling or laning. You can always heal up at the jungle after finishing this item.

Scarlet Phantom is the next item because its passive will trigger easily since Bruno has high critical chance from his passive.

Berserker’s Fury is a must since it synergies with Scarlet Phantom and increase the critical hit damage which is really important for Bruno that has high critical chance.

Malefic Roar is the 5th item since you don’t have any physical penetration aside from your emblem. By choosing Malefic Roar you easily kill enemies that by defensive item to increase their armor (not just tanks) and push tower.

Blade of Despair is the last item. Needless to say this item has the highest physical attack hence boost Bruno’s damage output by a lot even at late game. 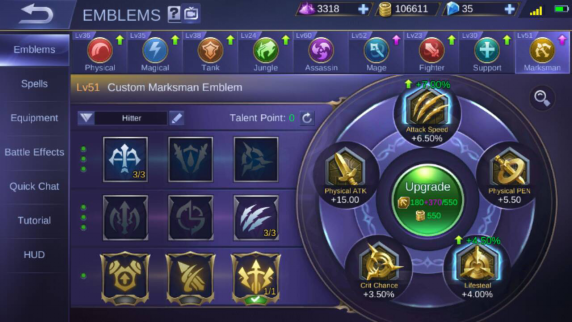 I’m using Custom Marksman Emblem for Bruno. What I maxed out is Bravery for +12 physical attack and Swift for +5% attack speed for 1st and 2nd tier. Bruno already has high critical chance, so increase in physical and attack speed will help trigger the critical hit. For the 3rd tier skill, I choose Weakness Finder. Main reason why I choose this skill is the slow that will help Bruno kites his enemies so he can land more hits (similar to his ultimate skill).

Inspire is the best battle spell for Bruno since he has positioning skill that’s basically his “flicker”. Attack speed increase synergies with his high critical chance so he can deal high damage even in early game.

Retribution is also can be used if you want to increase his farm speed even more. But the downside is retribution don’t give much value when it comes to teamfight other than small damage and slow if you buy at least 2nd level of jungle item.

During the laning phase, try to harass your enemy with your 1st skill. Utilize 2nd skill or 1st–2nd skill combo (as mentioned at Skills section) to speed up your farm. You can also use 2nd skill aggressively to harass your enemy although it’s not recommended because usually your position will be too far from your tower and it makes you vulnerable to ganks. Also use Inspire to push turrets because it’s nice for your team to be ahead of gold at early game and it allows easier gank to the enemies. At this picture, Bruno is activating his 1st skill to hit minions and Fanny altogether. He’s farming and also poking Fanny at the same time.

Use your ultimate at teamfight to break your opponent’s formation, hence creating chances to pick off their back-line damage dealer (marksman or mage). Maintain your position behind your team’s tanks and try to kill their damage dealer first. Don’t hesitate to use your 2nd skill offensively if you see a chance to kill the enemy.

Bruno is definitely one of marksman heroes that are strong at this meta since he can position himself and speed up his farm. His early damage also can’t be ignored since he has high critical chance so you can join early skirmishes and grab some kills or assists. I wish you all the best and hopefully this guide can help you to understand Bruno better and use it to rank up even higher.