Kimmy is obsessed with her chemical creations. As a result, she can move and aim at other directions when using her spray gun but is often less accurate.

- Energy is regained when an auto attack hits, similar to Lesley

Also, all the buffs on Attack Speed will be converted to Movement Speed buff for her.

- Basic attack does not scale with attack speed, so the number of bullets per second is limited. When changing courses, your basic attack will come in disrupted blobs. That means you need to focus on one direction for a while to have a steady stream of auto attacks. 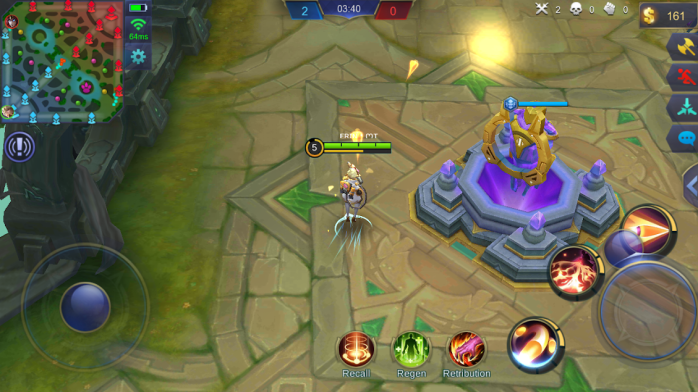 - Currently, the auto attack joystick doesn’t quite line up with her in-game direction. Don't know whether this is a bug or intentional

- If you get stunned in the middle of auto-attacking, when you recover, even if your attack joystick is moved, you have to re-aim

After being stunned by Gord:

My attack joystick is moving, but my autos don’t appear.

After being stunned by Bruno:

My autos also don’t appear even though my attack joystick has been moved.

- Auto attacks come out really slow since you need to adjust the joystick everytime you want to attack. It’s not as quick as other marksmen where you just have to hold down a button.

- Range seems pretty short, comparable to Karrie. However, the problem is that her basic attacks will not follow the enemy when they dash out of her range, unlike Karrie, since they aren’t autos. Therefore, harder to catch escaped enemies

- Enemies can hide behind minions to dodge your basic attacks Her basic attacks change to shots with longer range and explode when they hit a target or when reaching their max range. Her ammo is based on her energy and it runs out pretty fast.

You can regain the energy by hitting basic attacks or using skill 2 and skill 3. 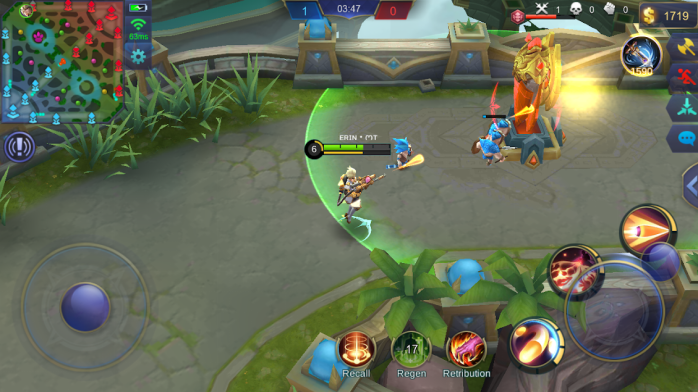 This can’t be used to hit towers.

Kimmy enhances her chemical attacks by creating a new kind of mixture. She then shoots out the enhanced chemical spray and recoil, in turn, pushes her backward a certain distance. The spray then falls down to the ground and creates a contaminated area. Enemies who walk on these areas take 14(+40% Total Physical ATK)(+50% Total Magic Power) points of Magic Damage every 0.5 seconds and become slowed by up to 60%.

A pretty short dash that regens about a third of your total energy.

You need to be quite near to the enemy for the slow to be useful, so it’s not really a very useful CC. Moreover, if you’re trying to slow a running enemy that is far from you, you need to be close to them, which defeats the point of using CC to stop their escape. It’s used to run away from the enemy more than anything else. Similar to Clint’s dash. 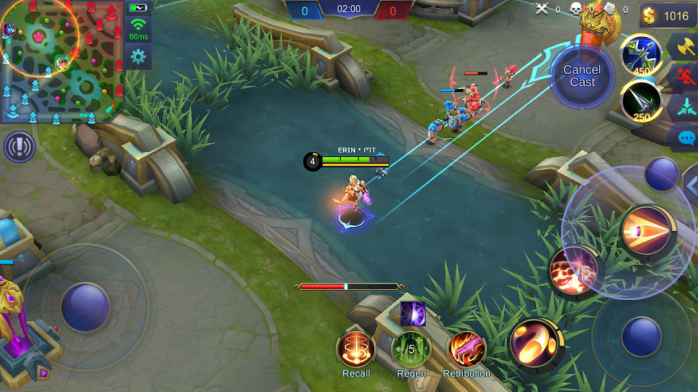 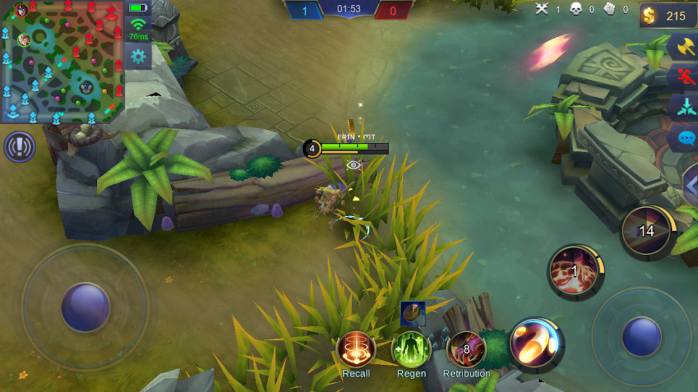 It charges like Yi Sun Shin’s second skill. The longer you charge it, the longer the range is. It can’t hit minions, but it can hit jungle monsters. The maximum length is probably around the range of Layla’s ult. Similar to Lesley’s ult, but with a longer hitbox and manual aim.

A pretty fast skill shot, comparable to the speed of Moskov’s ult. Aim at where you predict your enemy is going. Good for chasing down enemies that escape your auto attack range.

While charging, her movement speed is slowed.

Regens about a third of total energy.

Any of these two is fine. I prefer rapid boots since the 2.5% isn’t much of a difference.

Critical hits increase the hero’s Physical Attack by 5% for 2 seconds.

Best attack item for any marksman and adds to her physical damage.

Skills that damage an enemy hero will carry a 15% slow down effect. This effect lasts 3 seconds. Stacks up to 2 times.

Kimmy has very little CC and Ice Queen makes your basic attacks while Skill 1 is on procs the slow down effect. allows you to Spell Vamp while your first skill is active. At the same

The perfect item for Kimmy since she’s the first mage/marksman. The Magic Power is good for your skills and you still get an additional 20% Movement Speed.

Each basic attack grants 4% health stealing for 3 seconds. Stacks up to 5 times.

Since Haas Claws only scales well with full physical attacks, Demon Hunter is a good replacement. Moreover, you can get an increased movement speed.

Attacks the enemy 5 times in a row and improves the hero’s movement speed by 30% for 2 seconds. This effect has a cooldown of 15 seconds.

An increase in movement speed would be good since you don’t have a reliable dash.

After reaching late game and when your money starts to leak, you can sell your boots for Scarlet Phantom or Windtalker. They still give you movement speed and additional Physical ATK and Crit Chance.

When 1.5s of dealing damage with Basic Attacks, movement speed is increased by 40% and regenerates HP equal to 30% of hero’s Physical Attack. Cooldown is 10s.

You might need the extra movement speed when chasing enemies.

Kimmy really needs this dash. Her only short dash is barely enough for mobility.

If you’re building high mobility(attack speed), you can purify and reposition yourself.

Kimmy doesn’t have a reliable dash and is extremely squishy. If she gets hard CCed, she wouldn’t be able to survive a burst. Their high mobility also keeps her from hitting skill shots.

Most of Kimmy’s attacks are projectile so she should be able to shield the attacks.

Mobility and high burst damage. Laning against Harley would be a nightmare for Kimmy.

Should you play her?

Maybe she’ll get buffed upon release, but currently, marksman like Claude, Hanabi and Karrie can serve much better. They have better late game damage and are more efficient at their job.

I feel like Kimmy doesn’t know what she is. She does AOE damage but the hitbox of her autos are too thin to do that. Irithel and Hanabi can hit several enemies better and harder. Her single target damage isn’t as good as other marksman either.

Although she is a unique marksman/mage hero, she’s just not as efficient in her job as other heroes.