THE SPLAT QUEEN KIMMY WITH A TWO JOYSTICK CONROLLER

Kimmy is obsessed with her chemical creations. As a result, she can move and aim at other directions when using her spray gun but is often less accurate. Also, all the buffs on Attack Speed will be converted to Movement speed on her.

· Building attack speed on Kimmy like Windtalker, Scarlet Phantom and other gear that provides attack, she will gain more movement speed.

· Combing with Rapid Boots, she will gain more movement speed.

· Movement Speed is limited up to 540 (estimated only)

- This is skill is consumable on energy but using basic attack it will regenerate faster.

- This damage was a splash damage, where nearby enemies were affected even they are not the target.

- Upon Activating this skill, as you can see in Picture No.1 there is another joystick on the right side, using that joystick you can spread the attack by rotating the joystick continuously.

Kimmy enhances her chemical attacks by creating a new kind of mixture. Each refined blast deals 14(+50% Total Physical Attack) (+50% Total Magic Power) points of Magic Damage and slows enemies by 20%. Enemies become immobilized for 1.2s if they are slowed by this attack 5 times. 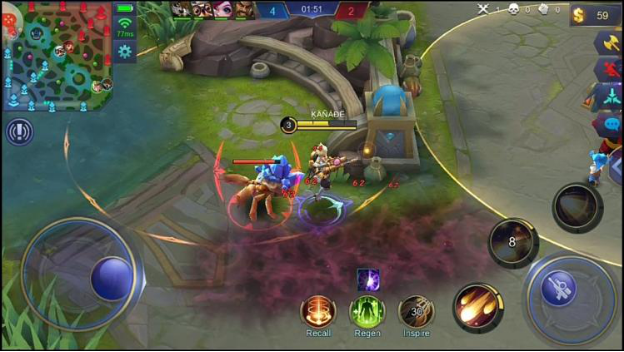 - Using this skill, hero who passersby he/she will reduce the movement speed up to 60% reduction.

- Using this skill, Kimmy can use as an advantage for running from the enemy. 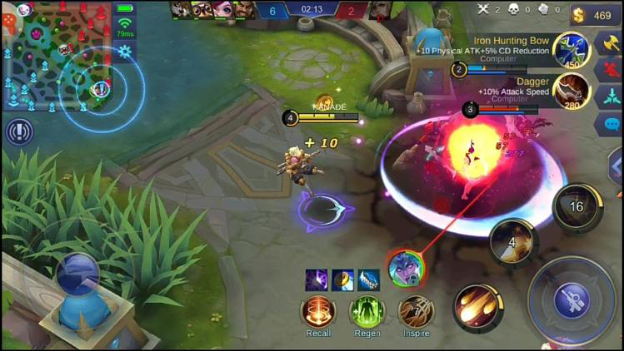 On her Ultimate Skill she can adjust into a longer range in order to hit her target. 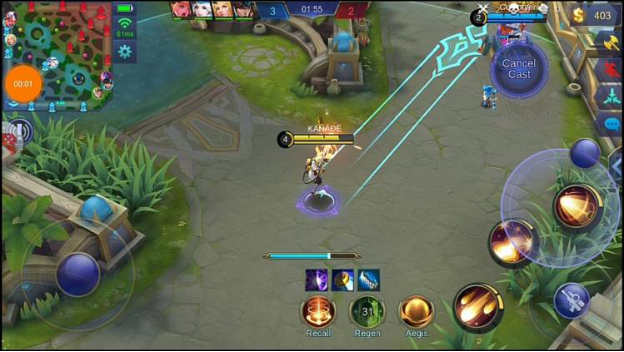 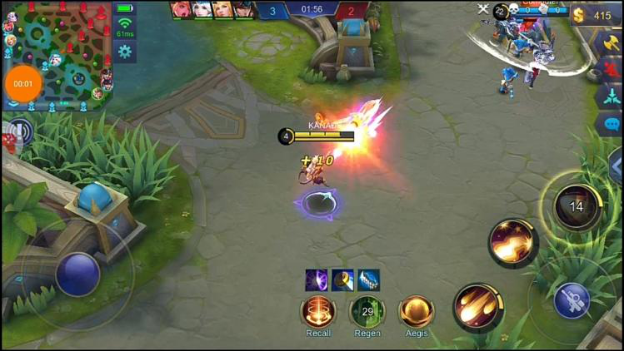 - Her ultimate skill can be block by the enemy heroes, so I suggest to have a perfect aim to make the enemy bulls eye.

In this section, I will show two options on what will be the best gear setup for Kimmy with a role of Marksman and Mage.

I. First Option (All MarksMan build)

This item gives +70 physical attack and +20 Lifesteal. When HP drops by 40%, the hero will receive an extra 10% Lifesteal.

BLADE OF THE 7 SEAS

This item gives +75 Physical Attack and +300 HP where it will lower the target’s physical defense by 25 points for 3 seconds.

This item provides +170 Physical Attack and +5% Movement Speed. Also, in attacking enemy units that have HP below 50% will raise hero’s Physical Damage by 30%. Last 2 seconds. (Take effect before damage is dealt).

This item provides +65 Physical Attack and +30% Attack Speed. For every 1% of critical chance, will add 1% attack speed. Normal basic attacks add a stack of endless strike. After accumulating 2 stacks of endless strike, the effect of the next basic attack is triggered 3 times.

This item gives +70 physical attack and +20 Lifesteal. When HP drops by 40%, the hero will receive an extra 10% Lifesteal.

This magic item provides +75 Magic Power, +300 Mana and +10% Cooldown Reduction and every 6 seconds, hero’s next magic skill deals bonus magic damage up to 3 enemies that scales with hero’s maximum mana.

- I BETTER RECOMMEND BUILDING OR CREATE OUR OWN BUILD SETUP FOR KIMMY SO THAT WE ARE COMFORTABLE ON USING HIS ABILITIES.

On the following Emblems and Talents here are some guide that you might use it.

MAGIC SURGE: Dealing damage with skills increases magic attack by 11-25 (increases with hero level) for 3 seconds. It has a 6seconds cooldown.

IMPURE RAGE: Dealing damage with skills, adds extra damage that equals to 4% of target current HP as magic damage and restore 3% of mana. This effect has 5 seconds cooldown.

BRAVERY: Use to increase Physical Attack

GREED: Use to increase Lifesteal.

DOOM: Use to increase Critical Damage.

WEAKNESS FINDER: Basic attack has a 20% chance to trigger 90% movement reduction to the target enemy; this effect has 2 seconds cooldown. This won’t work on Melee Heroes.

BRAVERY: Use to increase Physical Damage.

SWIFT: Use to increase Attack Speed.

FATAL: Use to increase Crit Chance.

OPEN FIRE: Dealing with skills increases Physical Attack by 5% for 3 seconds. This effect has 6 seconds cooldown.

1. FLICKER: Use for escaping or chasing enemy

2. AEGIS: Give a shield with the hero itself and the lowest HP of an ally.

3. INSPIRE: INCREASE ATTACK BY 55% AND ALSO WILL IGNORE 11-50(DEPENDS ON THE HERO LEVEL) ARMOR FOR EVERY BASIC ATTACK.

Hello guys, here is something that is new that we didn’t yet see on my past guides, starting this article, I will provide some trivia’s where everyone should know what some possible personalities of the hero in the game.

- Her name is a short form of Kimberly, which is of an Old English origin meaning "from the meadow of the royal fortress".

- Kimmy is the first hero to be a Marksman/Mage type.

- Kimmy has a unique mechanic of attacking: instead of an attack button, there's a joystick that can be held down and aimed to allow her to attack continuously. There's a resemblance with the controls from Doodle Army: Mini Militia 2 or Moonton's other game Mobile Battleground Blitz.

- Kimmy is the second hero that can move and attack at the same time; the first is Irithel.

- Kimmy is the only hero to use 2 Mana sources.

Note: If anyone already saw this trivia, I just only wanted to share that other readers didn’t read yet.

MAXIMIZE THE ULTIMATE SKILL NEXT (till level 12)

- Kimmywill be 30% off discount on diamonds upon launching.