Dealing damage to a target reduces their physical defense. Stacks up to 5 times. Last 5s.

Shoots out 4 flying swords, with each sword dealing physical damage. Swords will spin around the hero for a time and fly back to Saber. Using the Charge ability will call the swords back earlier. Swords also deal damage if they hit an enemy on their way back. 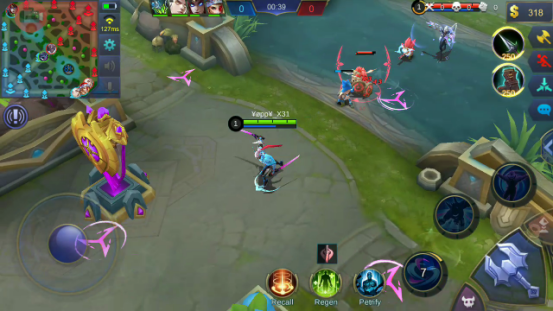 Saber’s main damage for laning and clearing jungle comes from Flying Sword. It is also very helpful for harassing and poking enemies without getting damage.

Charges towards to a specified place, dealing physical damage to enemies along the way. This skill is mostly used for chasing and escaping, with its long dash and can be used to pass through most walls.

Attacks an enemy hero, knocking the target airborne and then dealing 3 blows in a row, each blow causing physical damage to the enemy. The high damage and disable of this skill secures a successful ganks and kills. If used wisely at the right target, this skill can make the enemies’ back row useless during team fights which can lead to an easy victory.

1. Use Charge to close your gap with the target. 2. Then Triple Sweep to knock the target airborne.

3. Finish the target off with Flying Sword. 1. Wait for the enemies’ damage dealer before engaging. 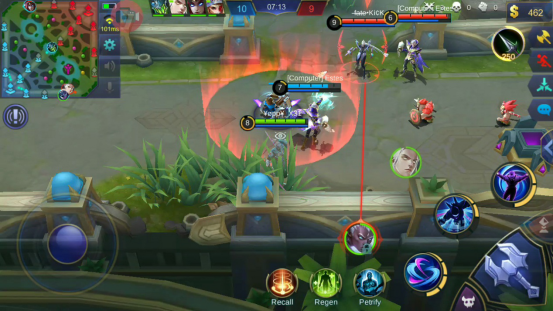 2. Use Hero lock mode to lock your target. 3. Quickly use Triple Sweep to disable the target.

4. Cast Flying Sword to finish off the target.

Start off with Hunter Strike for cooldown reduction and the bonus physical damage to help you spam your skills more with a higher damage. Then go for Warrior boots for its passively increasing armor and mobility. Rose Gold Meteor and Wings  of the Apocalypse Queen will help you to easily burst your target down and escape safely during team fights. Then get Blade of Despair to boost your attack and skill damage and Immortality to secure your safety while you deal with your target. This build will help you deal a considerable amount of damage as well as a good amount of defence.

First of all, before you take Hunter Strike, it is good that you take Magic Shoes as it is cheap and still gives a cooldown bonus for spamming your first ability. Then you go to Hunter Strike for the attack damage bonus to increase your damage output and an even more increased cooldown reduction so that you can spam your abilities more often. After that you take the  Rose Gold Meteor item to give you bonus magic defense as well as a shield which gets activated when you health drops below 30% which mostly enables you to cheat death. And for the next item, you take Endless Battle which gives you a great stats boost as well as a bonus true damage after using your abilities, this item is especially great for Saber due to his high attack damage giving him a mini Execute spell once every 1.5 seconds. Then you go for Malefic Roar which will give you a bonus armor penetration, useful for taking out squishy heroes with the bonus true damage from Endless Battle resulting in a very high damage output in the shortest amount of time. And finally, go for Blade of Despair to give you a high amount of attack damage, which in turn boosts your abilities enabling you to deal great amount of damage.

Petrify is useful for Saber as it can stop channeling skills and highly prevents your target from escaping.

Retribution helps you farm faster to stomp the game early which will easily let you snowball the game.

With Agility you get high mobility to gank and roam, while Invasion secures your kills with its physical penetration. Then, Bounty Hunter gives extra 125 gold every hero kill which is very helpful for getting early game items.

This battle spell combined with Retribution is for stomping early game, as Brutal increases your damage to monster and Knowledge gives cooldown reduction to your Battle spells and Veteran Hunter gives 40 extra gold every moster hit by Retribution. This means you can use Retribution more often and get more gold with it which will help you get your core items in no time.