HAS AN ESCAPE SKILL

Balmond’s key factor in defending lanes. This allows him to stay on desired lanes without ever going back to the base unless there is a possibility of being ganked when HP is low. He could even have faster regen through jungling.

Charges up to an enemy and deals physical damage to enemies along the way. After hitting the target, he will stop and lower that enemy’s movement speed. An Escape or Chase Skill. This skill must always be reserved for running away rather than chasing prey. Use this skill to chase down enemies only when everything is clear I.e. enemies are seen on the minimap far from you, other enemies are dead, or it is safe to do so. Note that you won’t be able run away quickly when this skill is on cooldown, and the possibility of you dying from a gank is critical.

For 3s, brandishes a large axe that continuously deals physical damage to nearby enemies. For 3 seconds, Balmond turns into a deadly swirl most especially for minions and jungle monsters. This skill is Balmond’s strongest advantage on the lane. He could clear crowded lanes in one sweep and regen at the same time, making him possible not to return to base unless otherwise needed. Use this skill to defend, push, jungle, or just annoy the enemies by catching damage while regenerating lost HP from minion kills.

Raises a giant axe to deal damage plus a fraction of the target’s missing HP as true damage to enemies in a fan shaped area in front of him, this also lowers the enemies’ movement speed. With the additional damage for the enemies’ missing HP, his ultimate makes him almost unstoppable from killing those who dare run away. The skill is rather tricky to use at short range, so use wisely; keep a small allowance for the skill to hit the enemy with a generous amount of lost HP, then unleash death.

His ultimate is also useful for killing the Turtle and Lord; perfect timing is key (image above, ult kills lord instantly)

As a Tank, there is really no need for skill combinations so let us analyze the timings for Balmond’s skill usage:

A. When to use/not to use Soul Lock:

2. Don’t use to initiate since the cooldown may put you at risk of not being able to run   away.

3. Don’t use for tower diving.

4. Use for escaping after a tower dive. 5. Use to chase only when conditions are met.

B. When to use Cyclone Sweep:

1. Use almost everytime at every minion or jungle monster or when close to your locked  enemy hero during clash. (Fun to use at a large group of minions)

3. Find a better spot when using this skill, where you can maximize your damage or target  the softest enemy hero.

C. When to use Ultimate:

2. Use for last hits, either for the enemies, the turtle, or lord.

3. Do not use to initiate since that would be a waste.

4. Do not use only for kills but also to strategically slow down enemies during clash and let  your allies deal more damage or save them so they could run away.

Note: Jungle Item is optional but it is really useful for fast minion/jungle kills

Build boots or the tank’s jungle item first depending on the situation. After you buy those two (no need for maxing out the jungle item) start buying Cursed Helmet for Magic resistance, and an added DPS for any monster or heroes. Then start buffing up with HP and armor with Demon’s Advent (Note: as HP increases Cursed Helmet’s DPS increases as well), after that be almost invincible by building oracle that let’s you regen after being attacked, combined with blade armor, you can now deal damage while taking less, plus a regen buff added to your regen passive. 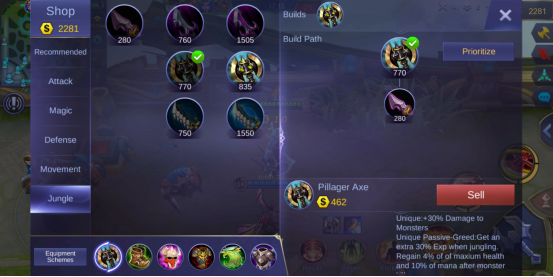 For your last item, Immortality, if ever you have built a jungle item, sell it, since this is on the late game now, you will really need that resurrect because you are the initiator.

I don’t recommend Balmond being used as a Fighter unless:

2. Your team has a reliable tank or two.

But I strongly recommend Balmond to be a tank to easily target the enemies’ damage dealers.

Useful for Crowd Controlling and Locking

Balmond is an efficient killer if he has fast Movement Speed, Gift gives you better regen, and “Pull yourself together” seems like the best emblem bonus out there.

If you don’t have a high enough level to obtain the “Pull Yourself Together” Emblem Bonus then use this Tank Emblem for Balmond.

As a tank, you’ll always need more magic resistance, and tenacity will make you more sturdy.