In this season, it is very rare to see players using Sun in a game whether it is classic or rank game. Sun is one of the oldest hero. With the new update, Sun gets it long overdue remodel and rework. He is getting a total overhaul from looks to skills. This might make players think about using Sun again. In this article, I will be explaining in the simplest way about Sun’s New Skills.

The new effect of Sun’s passive skill is when an enemy is near Sun or doppelganger they will experience a 10% reduction in physical defense, up to 3 stacks.

Old first skill, Sun smashes the enemy with golden staff that slows them down.

New effect, Sun throws his Golden Staff towards the enemy. That deals 250 (+80% Total Physical ATK) physical damage which increases the damage by 40 points of physical damage in every upgrade of the skill.

This reduces the movement speed by 40% with the enemy/ies that comes in contact with the staff for 4 seconds. Sun will create a doppelganger only if when you hit a hero or jungle monsters.

Old Second Skill, Sun attacks that slides toward the enemy.

New Effect is still the same with the old one but has an additional. Sun and doppelganger will launch an instant attack to the enemy. This deals 150 (+60% Total Physical ATK) physical damage. Damage increases by 30 points of physical damage when skill is upgraded. This grants a 30% increase of movement speed for 2.5 seconds. What is nice about this skill is that even though the enemy is a bit out of the skill’s scope, sun will still launch an instant attack only if his doppelganger is near the enemy. The new effect also lands exactly to the enemy not like the old skill effect. 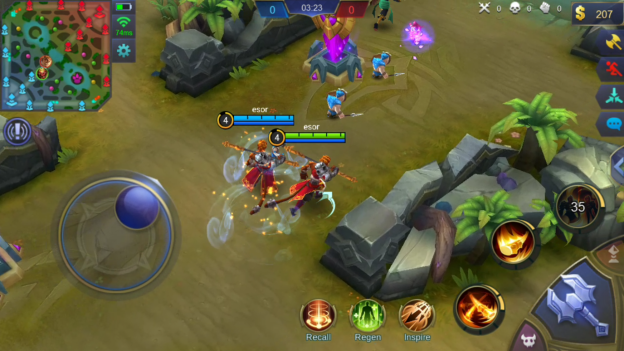 The ultimate, summons 2 doppelganger that only adds attack and an hp. When sun is in this state (refer to the photo above), he is like invincible you are not able to attack him. When perfectly timed in using the ulti, this state can give Sun an immunity to any skills.

This new Sun can summon up to 2 doppelganger only just like the old Sun. The difference is that the new Sun needs to use the first and ulti skill to summon 2 doppelgangers, while the old Sun only needs the ulti.

Use Ulti Skill, this is to ready your second hero to attack. Immediately use First Skill, Sun will throw his staff which will slow down the enemy and gives you an advantage to attack. It will also make a doppelganger when you hit an enemy. With the doppelganger near the enemy, this triggers your passive skill. Then use Second Skill, this adds Sun a movement speed plus you will land exactly in your enemy that gives you again an advantage to attack.

Don’t leave Sun out yet, he will be a very effective hero in Pushing and especially in a team fight.