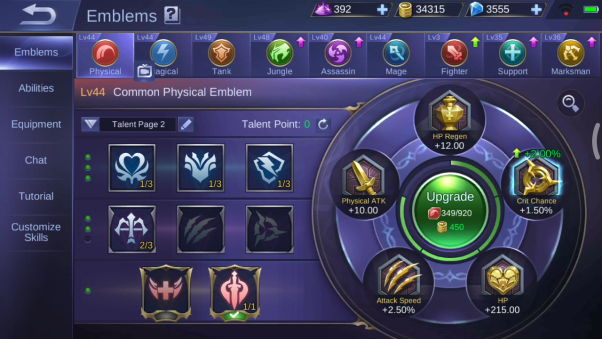 +35 Physical Attack
+25% Attack Speed
Unique Passive-Devour: Basic attacks will deal 10% of the target’s current HP as additional physical damage (up to 60 against monsters).

Passive-Devour: Each basic attack grants 3% health stealing for 4s, up to 4 times.

•This gear is a must have for sun as his clones can also use the passive of it. So if you're fighting against a tank Sun will Slay them very fastly.

•This item is used as an anti healer if the enemy has two many lifesteal like Alucard,

Hayabusa or support Heroes like Estes and Rafaela it will reduce there life regen by 50% for seconds and it works with suns clone so in a team fight you can send your to start the effect of this.

UNIQUE PASSIVE CORROSION
Basic attacks lower the target's attack by 10% and have a 50% chance to reduce the target's movement speed by 35%.

UNIQUE PASSIVE IMPULSE
Dealing damage with basic attacks increase your physical attack by 2%, up to a maximum of 6%. Lasts for 3s.

•This one of the must have item for reworked sun as it's passive stacks and works with his clones so when both his sun's clones are present enemies attack will be allowed by 30% and your attack will increase by 18%.

UNIQUE PASSIVE INSANITY
When HP drops below 40%, the hero will receive an extra 10% physical lifesteal.

UNIQUE PASSIVE SHIELD
Get a damage-absorbing shield every 30s. Shield absorption amount grows as the match goes on, maxing out at 1150.

UNIQUE PASSIVE BURNING SOUL
Deals 1.5% of one's max HP as magic damage per second to nearby enemies, and deals extra 50% of damage to minions.

UNIQUE PASSIVE BRAVERY
Increases 10% of attack power and defense for nearby allies.

•With reworked sun this item is very useful now as when sun's clones are out the passive of this item activates so there's is total 30% attack power growth.