The Wings of Holiness, Rafael

· Damaging an enemy with a skill will lower their movement speed for 1.5 seconds.

· Healing an ally with a skill will increase their movement speed for 1 second. · Calls the Holy Light to fall light powers from the skies to strike nearby enemies.

· Dealing Magical Damage and revealing the enemies in a short period of time. 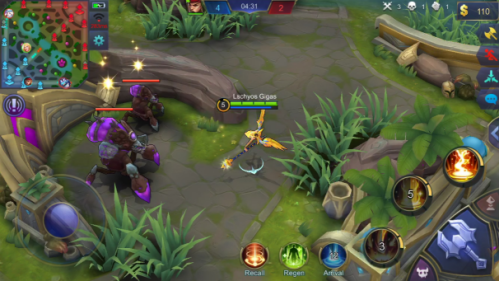 · Calls the Holy Light to heal Rafaela, and the most injured ally near her.

· Also heals for a lower HP regen for other allied heroes.

· Calls the Holy Light to cast a wave of light.

· Enemies that will be hit by the wave will receive a magical damage and stunning them for 1.5 seconds.

· As a Support prioritize to level up your 2nd skill to increase regen effect to your allies.

· As a Reaper prioritize to level up your 1st skill to dealt more and poke faster your enemies in early.

· Level up your Ultimate when available.

Do clearing lanes and poking your enemy heroes at the same time using your 1st skill. Whenever you or your ally got poke/damage by the enemies use your 2nd skill to regen percentage of your HP.

You can also use your 2nd skill to boost your ally for an escape or to chase your enemies.

Best use for your ultimate is when in clashes or team fights, using it to hit many enemies as you can, you can use it to disable enemies so your allies can dealt damages to them without chance of a fight or disable them so your low hp allied can escape the fight.

Build it according to its order.

Enchanted Talisman and Magic Boots helps you to cast many spells in early game because of their Mana regen and CD reduction, Ice Queen Wand increase slow effect when you are using your damaging skills to your enemies, Courage Bulwark gives buffs to you, your allied heroes and allied minions, Blood Wings and Devil Tears increase both magical penetration and magical power helps to deal more damages in team fights.

Build it according to its order.

Build it by starting with Enchanted Talisman or Wizards boots depends on what you need in early game, after that prioritize to build Oracle, then the last three items doesn’t really need to build according to its order, prioritize building what your really need in team fights.

Enchanted Talisman gives you CD reduction and Mana Regen helps you to cast your spells frequently in the whole game, Wizards boots gives you HP and 80 Gold each time you get an assist, Oracle gives CD reduction, Magic Resist, HP, and HP regen helps you to withstand damages in the game, Ice Queen Wand gives you spells a slow effect, Courage Bulwark buffs you and all your allies increasing your damage and defense in the game, and lastly Immortality for its passive skill to revive you whenever your enemies focus on you to kill.

Healing Spell – Regens 15% of HP and 10% of Mana of your hero and nearby allies.

Aegis – Immediately gives you or an allied hero with a shield absorbing damage.

Arrival – teleport to a minion or tower anywhere in the map.

Focusing Mark – After dealing damage to an enemy, the damage dealt by allies on the enemy will be increased by 6% for 3 seconds.

Healing Hand – After healing an ally or granting them a shield, their magic power and physical attack will incrase by 12 – 40 for 4 seconds.

· Diggie – Immunity to stuns and slows.