3. Can knock up enemies

Whenever Mino hits an enemy with basic attack or with skills his rage increase. You will see a red bar below his health that’s the RAGE BAR. Once that bar gets full he enters Rage mode and in rage mode he gets:

His skills also get bonus effects and once he lose his Rage mode, he can’t enter rage for a short period of time.

It’s a directional skill i.e you have to give direction to this skill. It’s an Area of Effect skill also i.e it can deal damage to more than one enemy. When you give direction to this skill Mino jumps to the designated location. When he lands to the designated location he deals PHYSICAL DAMAGE to all the surrounding enemies and also slows them down by 65%. Mino also recovers Rage from this skill.

When Mino is in rage state then the DAMAGE AREA of the skill become larger i.e it deals damage to larger area and deals also deals 1.5% of enemy max HP in physical damage.

1. You can use this skill to slow enemies as it is an area of effect skill it will help your teammates to take advantage. This is the support skill which will heal you and your teammates. Mino heal will depend on the amount of damage he has taken while allies will recover 280 HP. Mino will also recover rage within 2 seconds if he attacked by basic attack.

If Mino is in rage mode then he recovers HP within 2 seconds when is attacked by BASIC ATTACK not SKILLS.

Always Use this skill when you or your teammates are low in health. 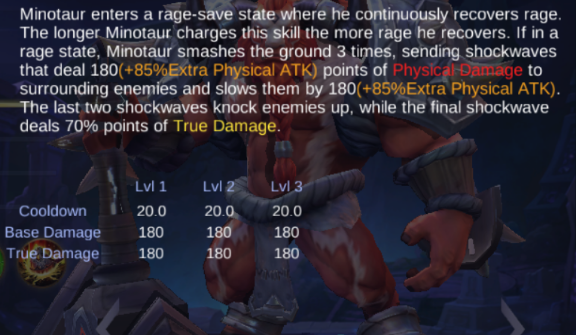 This is also an area of effect skill. Using this skill will continuously recover rage of Mino. Recovery of Rage is depend on the charge of this skill, the more you charge the more rage you recover. In addition to this if Mino is in rage stage then he will smash ground three times and deals damage and slows enemies down. The shockwave will knock up enemies while the last one deals TRUE DAMAGE.

1. This skill is a crowd control skill (CC), so try to use this skill when enemies are ganking your team as it will help your team to kill them fast.

2. This skill is also a life saver skill. When your enemies are chasing your teammate you can use this skill and make them knock up, this will help your teammate to escape easily.

3. Use this skill in rage mode.

I also recommend Petrify as it petrifies target i.e make them stop at one place.

It will helps Mino to escape when in low health.

You can use these boots to reduce CC duration and Magic Resistance. These boots also give +40 movement speed.

Ø Within 4s after being attacked, the hero will regen 8% HP. This effect has a 6s cool down time.

This item increase Tankiness of Mino against magic damage heroes and also against others. It provides large amount of HP and also gives HP regen. It’s cool down reduction also helps Mino to use his skills early.

Ø Deals 25% of opponent's physical attack as physical damage to an attacker when a basic attack is received.(PASSIVE)

This item gives huge amount of Armor which is useful against physical damage heroes. Its passive deals 25% of opponent physical attack as a physical damage to the attacker when Mino receive basic attack damage.

Ø Get a damage-absorbing shield every 30s. Shield absorption amount grows as the match goes on, maxing out at 1150.(Passive)

This item will help Mino to tank mages because of Magical resistance. This item also provide you good amount of HP and also its passive gives you a shield which can absorb damage. This item is useful in early games and help Mino to last longer.

Ø Increases physical and magic defense 40% and physical life steal 15% when HP drops below 40%.

This item gives large amount of HP and also kills or assist will help Mino to regen his HP.

This item passive will help you to get a 2nd life when you die. It provide good amount of HP and magical resistance. 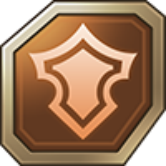 Being a support /tank Mino can give good advantage to your team in team fights plus his ultimate has knock-up effect which can knock up the whole team in team fight. Try to stay with damage dealers heroes and keep healing them and protecting them.

Don’t waste your ultimate and try to use it in rage mode. Rage mode is very important for Mino to try to do as much basic attack as you can so that you can fill up your rage bar.

In case enemy team is having more magical damage dealers, make magic resistance build in early game to reduce the damage done to you.