GREAT COMBINED WITH MOST HEROES

At first glance, this passive seems sort of useless but it’s more overpowered than one might think. While dead, Diggie can do recon work (provide vision for him and his teammates where they can’t see), he can also do tiny bits of damage with his chick skills to prevent the enemies from replenishing their hp and recalling, and what’s most rewarding for Diggie himself is that he can rack up assists while dead, which synergizes with the boots that grants 80 points per assist.

Throws an alarm clock at the targeted direction, it will explode after a set amount of time dealing 300(+40% Total Magic Power) in an area and stunning for 1.2s, damage increases with tick time (during ticking, tap again to immediately detonate the bomb. If detonated before 2s, the bomb will only slow instead of stun) This is the only high damage skill that Diggie possesses which means this is the only skill that will be used as damage to poke the enemies. This skill is never great except if it’s used with perfect coordination with Diggie’s 2nd skill.

This is the best skill for chasing and focusing enemies. When chasing an enemy with an ally, use the 2nd skill to bring back the enemy a few seconds back in time so that your ally may kill him. As said in the description of the 1st skill, this skill is most useful when used with the 1st skill in coordination (will be explained in the combos later). DO NOT underestimate this skill. Many skilled players qualify this skill as being the most cheated ultimate skill in MLBB. Use this skill in a teamfight when an enemy tries to cc a large group of people to make a damaging combo to all of you (Johnson ult, Aurora’s freeze with ult, Gatotkaca ult, Minotaur ult, Ruby ult etc…) that way your allies can continue to fight as if nothing happened and without taking hp damage because of your shield. Also, when enemy heroes like alucard and fanny launches attack in a 1v5 against you, use the shield to prevent them from life stealing and to kill them quickly. Also, when Harley ults an ally and the ally has a tiny bit of hp left, and the circle is about to close and kill them, use ult to give the ally a shield that will suck Harley’s damage and hopefully save the ally’s life. This ult has so much ways to be put to work, either while attacking or defending. 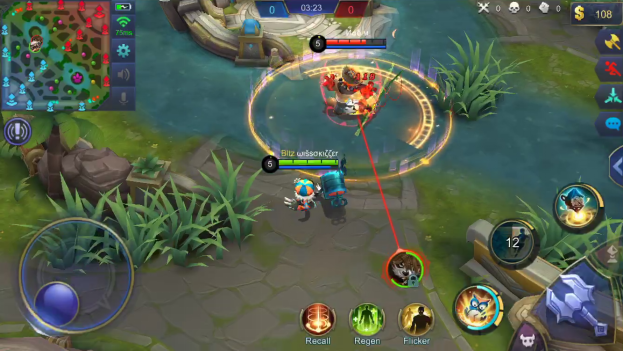 This is the combo that was described a little bit in 1st and 2nd skill’s description early on. These 2 skills have approximately the same time to detonate which gives them a great synergy: this means that you can FORCE an enemy to stay in the Time Bomb area with the 2nd skill so that he takes the full blast of the bomb. That’s how it’s done: you can either do 1st then 2nd, or 2nd then 1st. When the 1st skill is used before the 2nd, if the enemy does not get out of the 2nd ability’s range, the bomb will detonate before he gets sucked to the middle, which gives him a chance to escape the blast of the bomb. When the 2nd ability is used before the 1st ability, the enemy will get sucked into the middle, and the bomb will detonate after less than 0.5s which means that this is the best way to oblige the enemy to take the blast of the bomb.

And really, this is the only combo that you can use as Diggie, the same combo is used in teamfights to lock on the damage dealer so that your teammates may kill him easily.

It’s crucial to mention that you HAVE to use the Hero Lock mode from the settings because most of the times, when you use the 2nd skill randomly, it will lock on the tank which makes it useless in a teamfight. Lock on the damage dealer and focus him, this is the most efficient way to win a teamfight.

After having locked on the damage dealer in a teamfight, most of the times there are more than just a marksman or a fighter… There’s always a mage like Cyclops, Kagura, Gord, a damaging one. The next target will be THAT mage. Also DO NOT let your ultimate skill be wasted; which means use it to clear most of the pain for your teammates. If you have an enemy Akai or Kagura for example, don’t use your ult before Akai’s ult, you have to counter him (Diggie’s ult counter’s Kagura’s ult too ; it relieves allies from the strings that link them to the umbrella).

Diggie’s 1st skill is quite damaging but it doesn’t scale up a lot with the magical power, the 2nd ability too. This means, the best way to play Diggie is to build him full tank with a lot of cooldown to spam his abilities.

Just like in most cases, 30% cooldown is wisely enough. Now for each item individually :

Wizard Boots: The “assist” boots. As you know by now, Diggie’s passive means he can get assists while dead by spamming his chick abilities next to enemies and rack up coins with these boots without having to steal kills from your allies.

Dominance Ice: (500 mana, 70 armor, 5% crit rate reduction, 15% CDR…) This is the 1st item that will allow you to spam your skills as much as you can early game without having to worry about mana and without having to recall hopefully.

Oracle: This item lets you poke enemies without getting poked back at. In addition to 10% cooldown, the regen guarantees at least 400 hp back every time you get hit with only a 6s cooldown which means that after getting this item you can safely enter teamfights and tank for your allies. That also lets you lock on the damage dealer of the enemy team without dying on the way.

Bloodthirsty King: This item is mainly used for tanks and it’s kind of weird to see it on a support hero. DO NOT FORGET that this support hero is built as a full tank. This means you’re a support and a second tank for the team and Bloodthirsty King will make you take on long lasting teamfights as safely as possible and be most effective for the longest time. You’ll be amazed how many times you’ll be at 10% hp when an enemy dies and you get an assist and your hp jumps to 30%.

Ancient Ghostatue: Many people criticize this item saying it’s not useful because Diggie does not need it. Let me explain why I think this item is crucial. Even though you do have durability, this does NOT mean that you won’t recall during the game. In the late game, after a teamfight, most of the times the other team will still have the tank alive and a damage dealer. As a support you’re forced to stay with your team to protect them and the last thing to do is to leave them and recall. But when you’re obliged to (due to lack of mana or HP), go back as fast as possible to the fight and help your team. You’ll be amazed by how fast you’ll travel the map with the good emblem set to synergize.

The last item is really the player’s choice: the best 3 items are: Athena’s Shield, Courage Bulwark and Immortality. It really depends on who the enemies are and who has the advantage at that stage of the game.

Most spells are no use for Diggie but Flicker makes him chase better and position better in teamfights. If he can’t hit an enemy with his 2nd ability, just flicker and do the combi then go back after landing it. I cannot picture Diggie with another battle spell, this may be the most useful one.

The support emblem gives Diggie the best advantage amongst all the other emblems. Let’s explain why step by step.

Grants up to 6% movement speed (+the 4% of the emblem itself) which mean 10% mvt speed in total. Now, as mentioned earlier, a support hero has to be next to his teammates for as long as they’re in danger of an ambush or a sudden teamfight. When you’re a little far from your teammates, you want that extra mvt speed to get to them as fast as you can. This extra mvt speed also means you’ll land your 2nd ability more often on fleeing enemy heroes.

This one is not a very big deal, just an extra regen to make you a little more durable in the laning phase so that you won’y have to recall every 2 minutes due to enemies poking you.

As problematic as it can sound, this talent is very useful : it basically reduces the spell cooldown and the respawn cooldown by 15%. Why is it useful specially for Diggie?

Again, as a support, you have to be there for your teammates: a dead Diggie isn’t useful when he’s dead for a long time. When you die with Diggie, do your recon work fast, get an assist hopefully and go back to your lane where you’ll continue to help your teammate without having wasted a lot of time. That also means that flicker will have 102s cooldown instead of 120 which proves to be pretty useful.

Almost any damaging hero in the laning phase.

Litterally every combination works for teamfights.

The list is long, Diggie is a pain for ALL heroes

A pro fanny can counter him.

Except fanny, he’s rarely killed by a single hero.