—When passive stacks to 12, Khufra's next basic attack will have an increased attack range.

—This deals magical damage to the target. After attacking, it will return to Khufra and recovers some of his lost hp. —Khufra launches himself in the specified direction, damaging and knocking up enemy units in the landing area.

—This skill is chargeable. Khufra will automatically stop launching himself when he hits an enemy hero along the way. —Khufra will turn into a ball, damaging and slowing down targets if they are hit when the ball bounces. —Khufra will have an increase in both of his physical and magical armor when he is in this state. 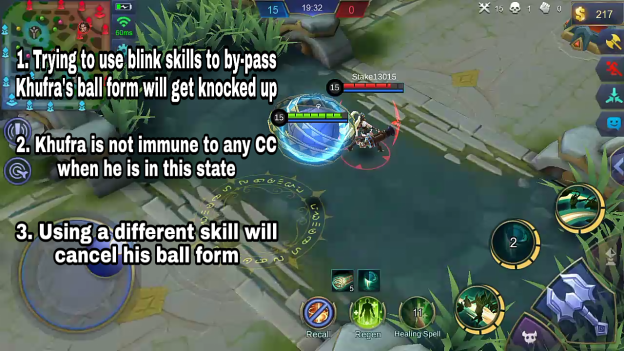 —Khufra forcefully pulls his surrounding enemies towards his front, damaging and slowing them down.

—Colliding enemies with an obstacle will inflict more damage and they will get stunned instead of getting slowed.

—Charge Khufra's first skill to the max to ensure that you'll reach your target.

—When you reach the target, instantly use third skill and try to collide them with an obstacle to apply stun. —Then second skill to maximize the damage inflicted by Khufra to his enemies. —Save the passive for last since it can slow enemies when attacked, to be able to chase them.

—Turn into a ball and bounce at the targets to slow them down for your team to catch up. —Use third skill instantly and try to collide them in a nearby obstacle if possible.

—Use basic attacks to deal damage per second while they are still stunned. —Save the first skill just in case if the target tries to blink away to catch them. —Physical defense, magical defense and crowd controlling grants a small amount of hp. The effects from his second skill plus this will make Khufra even more durable.

—Physical attack, physical penetration and an increase in physical power after slowing down enemies for a long period of time. The talents suits Khufra as a damage dealer.

—Bonus hp, hybrid penetration and increases the damage dealt by your allies after you inflict damage to your target. It's like you're weakening your enemies as you hit them.

—Another stun skill. With this, you can disable your enemies for a longer period of time. Combine with Khufra's third skill stun effect for better result.

—Khufra is unable to move freely when he is charging his first skill. To avoid any further casualties, apply flicker and just blink away from the incoming danger.

—There are times when an enemy can still manage to escape even though they only have a little amount of hp left. Execute can help you inflict that last needed damage.

—This focuses on durability.

—This one focuses on strength.

—Those who can't move while using a skill is an easy target for Khufra. If some of the skills of your enemy requires charging, then Khufra is a good counter pick.

—Akai can negate a CC skill and CC the enemy instead. Diggie can use his last skill even when CCed. Helcurt can silence Khufra just by attacking him, delaying Khufra's combo.