As you are reading this article, it is obvious that you want to know more about one of Mobile Legend’s most formidable tanks, Lolita. Lolita is personally my favorite tank-support hero and this article will help you see why. By reading this article, I assume that you know what you will be giving up and at the same time, what you will be getting. Being the team tank, you most likely will be saying goodbye to your multi-kills. Now, as I’ve said in few of my other articles, it is not impossible to get kills, it’s just that it won’t be your priority. Your priority should be the survival of your team, even at the expense of your own life.

BACKGROUND:
Lolita was born in a distant elven village, living a happy, uneventful life. That is, until war brought an end to those peaceful, safe days. Her whole village was destroyed in the war; her family torn apart. Just as her own life was in grave peril, Rooney, the master machinist of the City of Scholars, found her when he was passing through and took her back to Eruditio. To show her gratitude to the city, Lolita joined the City Guard and swore on oath to the death to defend its honor. Bruno very much admired and understood this young elf maiden’s spirit, and so he put in a request with the city scholars for their most advanced tech crystal—the Noumenon Energy Core—and bestowed it to Lolita. This powerful energy core endows Lolita’s tiny frame with the ability to discharge massive bursts of force, even allowing her to control a giant mechanical hammer with ease.

Now, before I get into the detail of each of Lolita’s skills, you should know that Lolita technically has a total of 6 skills. Like some other heroes, Lolita’s first and second skills have follow-up skills that can be cast for her to do other skills that could stun and damage. Confused? Let me help you, but before that, let’s talk about Lolita’s passive:

It takes 20 seconds for this passive to fully charge. And once it’s charged, Lolita can pass this shield to all nearby allied heroes! Having this shield that absorbs enemy damage is almost like having a free Athena’s shield even in the early game. Although each shield only lasts 20 seconds (or until it’s consumed by damage), Lolita can just pass yet another shield to her allied heroes. This isn’t the only skill that Lolita has that makes her a formidable tank/support hero but it definitely is a very useful passive!

On this screenshot, you could see that I have a shield around me. Now, if you look at the allied Valir, you would notice that he has added armor (white bar) to his life bar. If you look closer, you would even see a light blue ring around the allied heroes that you have passed your shield to. This light blue ring would is also the timer of the duration of the shield. Now, if you look near the bottom of the screen, right above the Regen battle spell, you would notice a small icon with an even smaller timer, which is the indicator of the recharge of Lolita’s passive. After it reaches the maximum 20 seconds, you can then pass your shield to all nearby allies. By knowing this, it is important that you share your shield as that added armor and life bar may help you and your teammates survive the clash and win the battle.

(First Skill – Blink): Charges toward a target direction, increasing basic attack damage and range in the next 5s and reducing target’s movement speed by 20% on hit.

(First Skill follow-up – Blink/Crowd Control): Charges at an enemy dealing damage plus a percentage of the target’s maximum health (TMH) as added physical damage while also stunning for 0.8 seconds.

On this screenshot, you would see Lolita about to dash toward the jungle monster. Note that after dashing, Lolita gains additional damage and range.

On this screenshot, you would see Lolita dash toward the jungle monster stunning it and dealing damage. The target will be stunned for 0.8 seconds and their movement speed will be reduced by 20% for 5 seconds.

In casting Lolita’s charge, since the added damage and range would only take effect before the skill is cast again for follow-up, it is best to take advantage of this. You may dash toward an enemy and hit them a few times then you can time you stun perfectly so that the enemy hero cannot escape. Remember, the stun would last 0.8 seconds and would slow the enemy for 5 seconds. This should be enough for you and your teammates to chase and kill the enemy hero. Otherwise, you can also carefully use this skill to dash away from pursuing opponents or stun and slow them while running away.

(Second Skill follow-up – Area of Effect): After Lolita casts Guardian’s Bulwark, you can recast the second skill to launch an energy blast. Energy Blast deals 400(+50% Total Physical ATK) to 800(+100% Total Physical ATK) points of physical damage to the first target hit and surrounding enemies. (The more projectiles and basic attacks the shield blocks, the more damage the blasts will do.)

On this screenshot, you would see that all projectiles from Miya are being blocked.

On this screenshot, I’ve cast Guardian’s Bulwark on the jungle monster so I can demonstrate the Energy Blast. 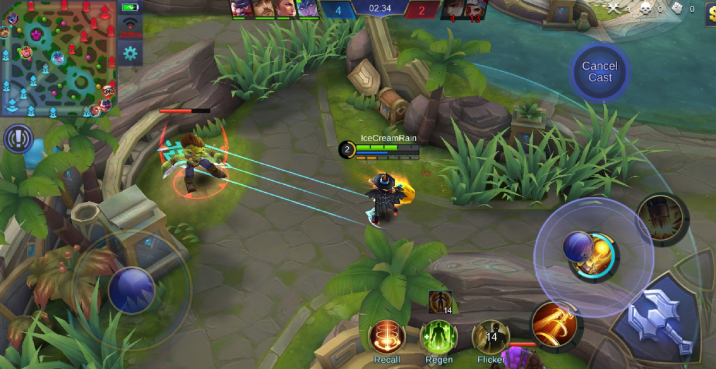 On these screenshots, you would see me aiming and firing the Energy Blast at the jungle monster.

People tend to neglect what I think is Lolita's most useful ability, her Guardian's Bulwark. There is a reason why she raises her shield and it's obvious as it's the reason anyone carries a shield for that matter: to block incoming attacks. With the right build, (CD reduction and Armor), Lolita can be the team's best asset. In fact, whenever she's played, she usually is the team's MVP. Lolita can go head-to-head with any Marksman, you name it! From Miya to Karrie, Irithel or even Lesley and etc! She blocks 100% of ALL projectiles. Yes, ALL of them. Including Karrie's ultimate, Miya's and Irithel's countless arrows and so much more! Her Guardian's Bulwark can also block the ultimate skills of other heroes such as Cyclops' Star Power Lockdown. Even if Lolita isn't the one locked-on to by Cyclops, Lolita can just stand in between the sphere (SPL) and the allied hero and the sphere will just vanish as soon as it touches the shield!

The Guardian's Bulwark is so cool that it can also block Lesley's Ultimate Snipe, Bruno's World Wave and even Franco's most useful ability, Iron Hook! And oh, so much more! Not only that, after it blocks all these attacks, Lolita can cast the second skill again to shoot a projectile that causes a significant damage (depending on the damage taken by the shield) to enemies gathered in an area.

Take as much damage as you can with the shield and tank! That’s why you have the shield, don’t be afraid to stand in the way of enemy fire. You shield can take a LOT of damage! And when the shield vanishes, hit them hard with an Energy Blast!

Noumenon Blast (Ultimate – Crowd control and Area of Effect): Instantly grants a passive shield effect, then after charging for 2s, deals 350(+100% Total Physical ATK) to 700(+200 Total Physical ATK) points of physical damage in a cone in front of Lolita. When casting at max charge, it will also stun for 2s (tap again to fire immediately). When charging, enemies within basic attack range will have their movement speed reduced by 75%.

On this screenshot, you would see that Lolita is channeling her ultimate. After maximum channeling, all enemies within range will be stunned for 2 seconds and will receive damage.

Lolita’s ultimate is pretty much the game changer. This is one of the very few crowd controls that has a huge area of effect! Imagine if all enemy heroes are stunned for 2 seconds, there’s so many things that could happen in that short period of time.

However, positioning and timing are very critical in casting this skill. If Lolita is disabled while channeling, the whole spell will be cancelled altogether and you will have to wait for the skill to cool down again. And if you skill misses, there is no point in casting it to begin with.

As much as you can, use this skill during every team fight. Again, it deals significant damage and is a very good disable! Plus the slow effect from this skill is something that people tend to neglect. Again, you’re there to support your team, and tank! So spam this skill whenever you can during a clash and do not just cast this to land the last hit!

You could use this skill to initiate a clash, stop enemy heroes from advancing while defending your tower or etc.

Bonus Tip:
If you have opponents who knows Lolita’s skills, they know how to avoid this. Some enemies just stay out of range. So an obvious tip would be to hide in the bush and wait for the enemies to fall within range and cast the skill. But if the enemies still manage to run away, there’s a secret to that: Battle Spell Flicker.

Since the ultimate requires to be channeled, there is a one-second delay before the skill is actually cast after channeling. During this one second delay, you can use battle spell flicker to move the direction of the cone-shaped skill and stun, damage and slow whoever falls within range!

On this screenshot, you would see that I intentionally cast Noumenon Blast a bit short from the jungle monster.

While channeling Lolita’s ultimate, I have prepared to use flicker to move the cone shape forward. However, with enough practice, you should also be able to flicker toward other directions.

As you can see, after the skill is channeled and I cast flicker forward, the moment Lolita let’s her hammer slam and the moment she flickers are in synch. In doing this, the Noumenon Blast is cast forward, now damaging, stunning and slowing the jungle monster that is now within range. Use this to your advantage.

SKILL LEVELING PRIORITY:
Maximize leveling your Charge up first then your ultimate, Noumenon Blast whenever available. Although your second ability is very useful, I still recommend maximizing your first skill first since it is a stun and would turn out much more helpful in the early game. The shield is a lot more useful toward the late game.

Now, before I get into more detail, I want you to know that you can play around with your build, obviously. But my recommendations are to focus on reducing cool down and increasing defense for maximum tanking and spamming of skills.

Unique Passive – Valor: Physical defense will go up 5 with each basic attack received, for an increase of up to 25 points. Lasting 3 seconds.

Unique Passive - Shield: Get a damage-absorbing shield every 30s. Shield absorption amount grows as the match goes on, maxing out at 1150.

Unique Passive – Thunderbolt: After you use the skill, next basic attack will carry an extra 50% of physical attack as true damage, and slow down the target and surrounding enemy units. Lasts 1.5s can only be used once every 1.5s.

+10% CD Reduction
Unique: Passive-Scream: Within 4s after being attacked, the hero will regen 8% HP. This effect has a 6s cool down time.

Level up either: Vitality, Firmness or Shield. (Or all three)
I also recommend maximizing Inspire for reduced CD. But you may choose to level up Fortress and Purify for added defenses.

Crowd controlling an enemy grants 5% of max HP. This effect has a 10s cool down.

Teleport a certain distance in a specified direction. For 1 second after the teleport, the duration of disabling effects received will be reduced by 50%.

For added mobility and for proper placement of ultimate.

COUNTER vs COUNTERED BY