Has No Mana Usage

- This passive allows Alucard to chase his prey with ease.

- Everytime Alucard using a skill, it will triggers this passive.

- This passive has no cooldown.

- Always be careful when using any skills, because it will trigger this passive. If you are clumsy a little, you will dash into enemy by sudden and it can be a disadvantage to you. 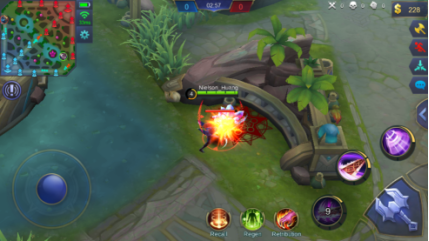 Leaps forward and launches 1 strikes. Each strike deals 240(+160% Extra Physical Attack) points of physical damage to enemy and slow them down.

- This is Alucard’s only escape and initiate skill.

- Usually used to chase enemy. Combined with passive, Alucard is a predator.

- Alucard can jump through wall by using this skill.

- Alucard can be stunned while jumping.

- Use this skill to avoid dangerous situation.

- This skill is an AoE (Area of Effect) skill. 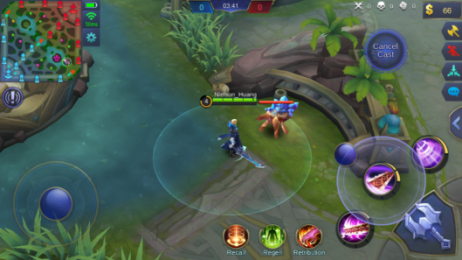 - Can be used to clean lane quickly.

- Has a decent damage early game.

- Usually used to initiate by combining this skill with the 1st skill.

- This skill has short a cooldown. 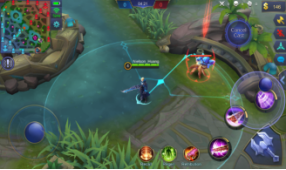 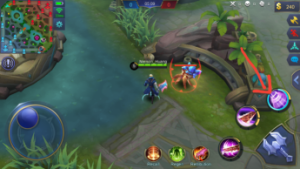 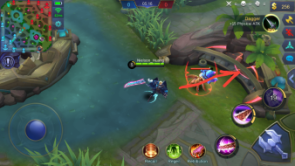 Raises the hero’s physical lifesteal 20% and also locks onto an enemy, dealing extra damage with any attacks on the target and raising lifesteal 100% for 8 seconds. While the skill lasts, the hero can fire powerful attack waves forward, dealing 440(+220% Extra Physical Attack) physical damage to enemies.

- This skill is a target skill.

- This skill is a buff type.

- After activating this skill, activate this skill again will unleash a single powerful wave (mentioned on skill description) in front of this hero.

Alucard probably has the shortest and easiest combo and it’s easy to execute all combo. The following are commonly used combo :

Level up ultimate when available

- At the beginning of the game, your main focus is to complete a level 2 jungle weapon “Nimble Blade”, it’s allows you to jungling faster, and each time you killed a jungle monster, you will get a stack (maximum 10) of bonus attack.

- Because Alucard are a melee hero, he need a durability early game. “Warrior Boots” is the best choice for Alucard.

- The second item to be finished is “Haas’s Claws”, the lifesteal of the “Haas’s Claws” allows Alucard to regen himself in the middle of the battle or jungling.

- The next item is “Berserker’s Fury”. This item will give Alucard 65 Physical Attack, 25% Critical Chance, and 40% Critical Damage. Which boost Alucard’s physical attack a lot.

- For the next item, we will have “Endless Battle”. This is the most vital item for Alucard. Beside the attributes of this item are good, the passive of this item allows Alucard to deal 70% physical attack  as true damage each time he is using his abilities. Combined with “Haas’s Claw” and “Berserker’s Fury”, Alucard can deals ton of damage to entire enemy team.

- The next item is “Malefic Roar” which give Alucard 40% Physical Penetration. This item will be useful at late game, especially if you are fighting a tank with your teammates.

- For the last item, there is 2 options. That is “Wings of The Apocalypse Queen” or “Blade of Despair”. If you are prefer more defense or durability, “Wing of The Apocalypse Queen” are the best choice. But because this build is a burst damage build, I recommend you to use “Blade of Despair” which give you 170 physical attack and 10% attack speed. And this item allow you to deals 10% extra damage to an enemy in any abnormal state (Stunned, airborne, transformed, disabled).

Alucard is a “Hard Carry”, which mean he is not very strong on early game. But he will become very deadly on late game, especially if all of his core items are ready. Because of this reasons, Alucard is really depends on jungling and farming. “Retribution” is far the best choice for Alucard, combined with jungling weapon “Nimble Blade”, Alucard can farm really fast and time efficient.

One of Alucard’s Speciality is “Crowd Controlling”, But his “Crowd Controlling” ability is considered as “Damage-Based Crowd Controlling” which means, his skill is just focused on damaging enemy in group and none of them can disable or locking enemy. Because of this reason, Alucard can be a worst initiator, especially if the enemy has many disable like stun, silence, he will knocked out very quickly. “Petrify” probably the best choice to minimize this weakness. Combined with 1st skill, Alucard can be a good initiator and of course with stun. But the weakness of this battle spell is it’s cooldown, which is relatively very long to be used again. Beside that, Alucard farming also will be slowed.

- Both recommended battle spells have their own advantages and disadvantages. Choose one of the battle spell wisely.

- If you are playing ranked. Always observe the composition of the opposing team. Then, decide what battle spells that suit the condition.

Recommended emblem are max level “Custom Assassin Emblem” with the talents listed below :

- Talent used in this emblem are “Mastery” for bonus cooldown reduction, “Fatal” for critical chance, and “High and Dry” which usually used on 1 vs 1 at solo lane.

- Talent used in this emblem are “Mastery” for bonus cooldown reduction, “Fatal” for critical chance, and “Bounty Hunter” which give Alucard bonus gold by killing enemy hero (Max 1250 gold).

- If you are using this build, you have to be active on team fight early game to gain bonus gold by killing enemy hero. But remember not to risk yourself, play safe and kill safe.