After attacking a target twice in a row, the third attack will deal extra true damage to the target that equals to 10% of enemy’s lost HP. As you can see by the monster feet, there are two red circle around. It is the passive skill.

As you can see the white damage, it is the extra true damage. Which will only occur during every 3rd attack only if attacking the same heroes.

Karina enters a state of Elusiveness for 3 seconds, making her immune to basic attacks and increasing 35% of her movement speed. In this state, her next basic attack will slow down the enemy and must be a hit, dealing extra 165(+75% Total Magic Power) pts of magic damage. Getting a kill or an assist will reduce this skill’s cooldown by 60%. 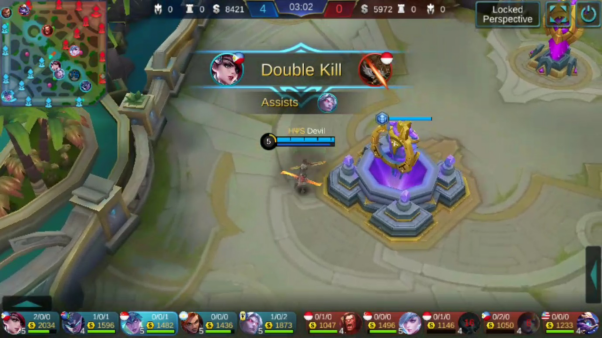 As you can see, Karina enter the state of Elusiveness. She will be immune and increases movement speed. This is the basic attack which will deals damage and slow down the enemies’ movement speed.

Brandishes double swords, dealing 260(+130% Total Magic Power) pts of magic damage to surrounding enemies. Getting a kill or an assist will reduce this skill’s cooldown by 60%. This skills cause area damage. Any heroes in Karina radius will received damage from her.

Make sure to have Hero Lock mode on so you can mark the hero with lowest Health first.

1) Use Ultimate Skill on lowest enemy’s health to rush towards the enemy and deals Massive damage and to be able to use other skills on the enemy.

2) Immediately Use 2nd Skill to deals AOE Damage and to trigger Karina Passive. 3) Use 1st Skill to Slow down the enemy and deals damage. This will stop the enemy from escaping away, even if it did escape, Karina will be able to chase the enemy fast.

4) Repeat 1,2,3 until all nearby enemies are eliminated.

1) Use 1st Skill to chase down the enemy, use retribution if needed. Both will be able to slow the enemy and deals damage.

2) Immediately use 2nd Skills to deals Huge damage to the enemy. Using 2nd skills on enemy that is near minions could help you to clear the wave too.

3) Use Ultimate Skill to rush towards the enemy. While you are using Karina’s Ultimate, 1st Skill should have finished cooldown, so you will be able to use 1st Skill on the enemy again and use 2nd Skill the moment it can be used to finish the Enemy.

Magic Shoes to reduce the CD Reduction of Karina’s Skills.

Concentrated Energy to increase Spell Vamp so Karina will be able to have a longer health.

This is to help slows the enemies and clear jungle monster faster. So that Karina will be well fed in early games.

This will further help Karina to either chase down enemies or use to escape.

She can use Flicker to enter a team fight and start using her skills/ultimate.

She can use Flicker to escape from enemies’ chasing.